Over the first weekend in October I went to Conflux 7 in Canberra. I had a wonderful time, talked to nearly everyone, went to book launches, drank coffee, was given a beautiful bouquet of flowers, banqueted like it was 1929 (I have no pictures of that, but there are quite a few around the traps), spent time with some of my favourite artists, writers and people, then spent several days afterwards simply recovering.

If I do a full con report, you won’t get any report at all, so here are the sketches (the cartoon ones are the sketches I draw and upload on Twitter and Facebook as I go). Clicking on pictures should give you an option to see them at a larger scale.

“If you see me coming, better step aside”: 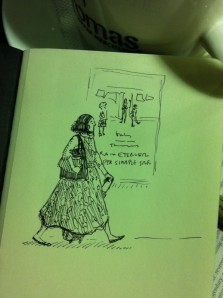 People reading in the airport:

It was not sunny. The wind blew over the coffee cups at the right angle to create suction, draw the foam out through the lid and spit it back at me: 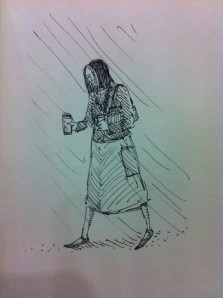 People knitting (I didn’t get a sketch of the drop-spindle) and impersonating weather (there were CSIRO scientists presenting at the launch of the Winds of Change anthology – this is an admirable innovation). Also hands. I developed a fixation this convention:

I think this was before the launch – I felt the need to act out a story Devin was telling. It involved a spider guarding a doorway: 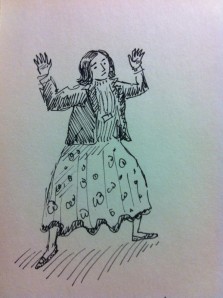 I was on a panel designing a getaway vehicle for an super villain (and would like to note, for the record, that my suggestions – a self perpetuating series of pneumatic tubes, and a Ford Falcon station wagon – made it to the shortlist). The winner was the cloud from Monkey, and… I can’t remember the precise order of events which led to this drawing, but Phil christened it “the Duck Lord” and Alan made off with it: 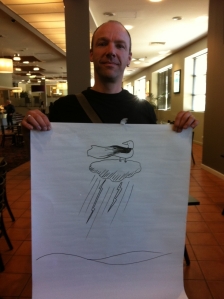 More hands. Some people talk with them, and some hide them under the table (this is why there is a higher proportion of Nick to Lewis):

Disco attendance was small but enthusiastic. The DJ finally asked a burning question: 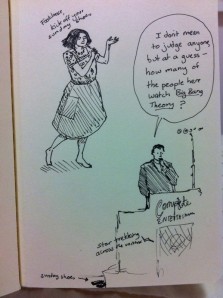 Afterwards I had to (a) find and (b) drive my sister’s car, which is much more hi-tech than mine. I had to call her to work out how to start it: 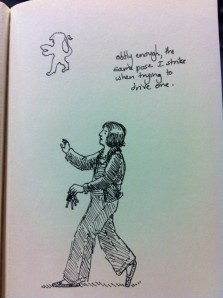 On the last day, I even drew on Gillian’s hand:

Some terrifying hands, and then an installation at the art gallery, where I wandered around alone, attempting to replenish my stock of words:

And looked at birds and old motorcycles:

My sister took me to Costco, which had the unsettling misproportions of a doll’s house: 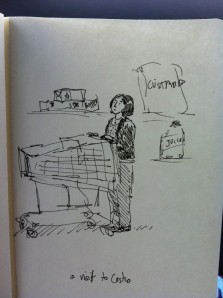 My nephews required a morning to be spent drawing fighting Pacmen: 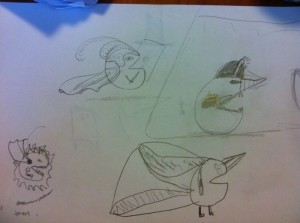 I tried to convince a friend to ride the merry-go-round with me, but she declined, so I went alone:

And then I came home, and the whirlwind continued. Here I am defending my coffee-cup from an over-eager waiter before picking my other sister up at the airport: