So, as you may have noticed from my updates on this blog, I have been away for a few weeks. If you were following me on Twitter or Facebook, you may have gathered that I was in the USA, having a grand time and drawing all over the place. This was an illustration-focused trip (thanks to an Arts Qld grant), and as usual I kept a sketchbook instead of taking photos. In between I looked at a great deal of art and talked a lot (but not nearly enough) to many wonderful and dazzling people and ate everything except vegetables. But here, in accordance with tradition, is an account of some of the slow-moving things I saw. (1) People in hi-vis gear in international airports. (2) Spectacular views between LAX and NY (tip: if you can get a window seat in daylight on that stretch, do). (3) New York, being New York. 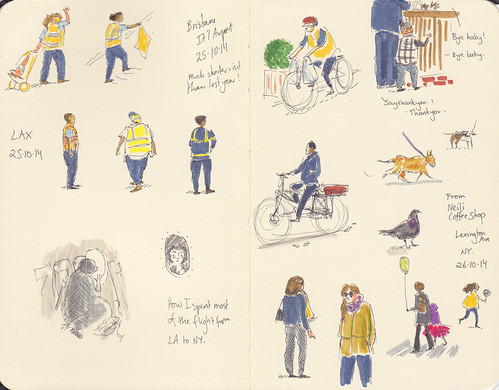 The week I arrived was (would have been) the week of Dylan Thomas‘ 100th birthday. After church (where I met three lovely ladies from Holland, with whom I met up for dinner the following night) I showed up at the sold-out production of his Under Milk Wood at the 92Y, and was able to get a ticket! It was a live BBC Wales broadcast, from the stage where it was first performed, with a Welsh cast directed by and starring Michael Sheen. I may have cried a little. (Tip: if you are visiting New York City, check out what’s on at 92Y). Then on to the Bowery Poetry Club (tip: if you’re visiting, check them out for events) for Dylan Thomas readings, featuring , Dr Elaine Canning, Bob Holman, Kevin Powell and Gwyneth Lewis (which reminds me, she had an essay in the latest Poetry magazine and I should subscribe). 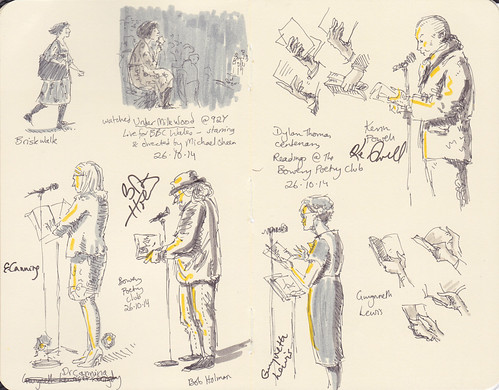 Afterwards, it was open-mic night, but there were so many poets left over that they pretty much alternated poets with singers, and I even stood up and gave a reading! (I read ‘Bears My Mother Brought With Her‘ and ‘Print is Dead‘). More New York the next day, including many gallery visits (I met a very nice lady from Mitchell-Innes & Nash gallery at the 92Y and discovered many neighbouring galleries as a consequence). 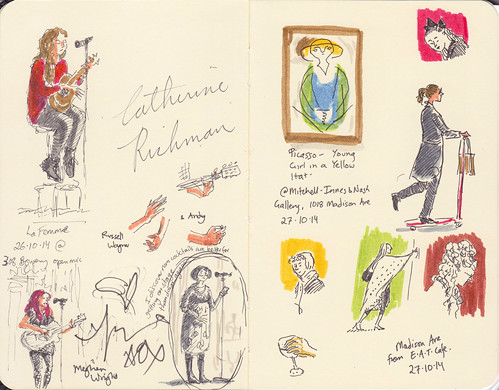 A gorgeous exhibition of mourning dresses at the Met, but I was particularly taken by the humour in medieval art elsewhere in the museum. I find it easy to get a fossilised, received view of historical periods, and there is a delightful jolt of rediscovered humanity in seeing the actual artefacts. Saint Emerentia jovial and mysterious, crooked iron crows, misanthropic owls… 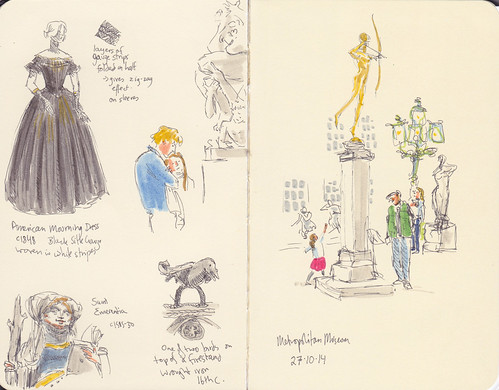 A visit to the Society of Illustrators for lunch with Irene Gallo and Greg Manchess (who are wonderful), followed by sketching Mario Reuben Cooper‘s choices in hands in the stairwell, and assorted details of the picture book exhibition. 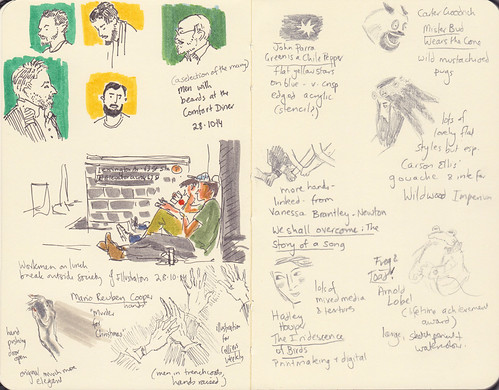 Then I sketched hands on the subway and missed my stop on the way to the Village and McNally Jackson Books, where we (Kelly Link, Sarah Reese Brennan, Joshua Lewis, Alice Sola Kim, Greg Purcell and I) gave readings from Monstrous Affections before going out for far too much pizza. The account of exactly how I gave a reading from a comic is a subject for another post. 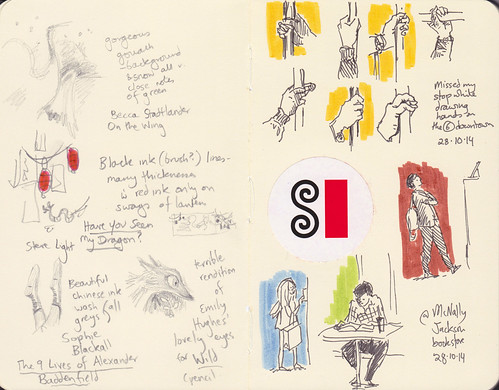 Next in the series is Part Two: Boston