In this instalment of tv sketching, I’ve discovered Les Petits Meurtres d’Agatha Christie (Wikipedia; AgathaChristie.com), aka Agatha Christie’s Criminal Games / Little Murders. Only one season (one from the 1950s-set series — the season numbering is convoluted) is currently available here on SBS On Demand, and only for a few more days.

With melodramatic poses and distinct costuming choices, this makes it a lot of fun to sketch.

For other TV sketching, see the TV SKETCHING category.

If you’d like to support art and writing and posts like this about it, here are some options!

I’d been reading a lot of novellas, and thinking about books which felt just the right size, so above is Melisande from “Melisande, or Long and Short Division“, by E. Nesbit.

Or: Overdoing things — a self-portrait

This little piece of excess from the observation journal was intended as a sort of timing run (as you can see from the yellow notes on the right). Any one square of it, in the event, would have been about as much as I’d expect from my students, but I was having fun, and dinosaurs, and avoiding something and, since it was still January at the time, surrounded by people to half-watch.

The basic idea was to list 5 Problems To Be Solved down one side (based on previous observation journal pages, i.e. traffic on the Walter Taylor bridge, the general indignities of medical procedures (I was getting scans of and needles in my spine about this time), a story I was struggling to write, something to do with card games, and the eternal battle of momentum vs inertia.

Across the top, I listed five current preoccupations/things noticed, which that day were Egrets, Dinosaurs, Antique Bottles, Ground Rocks and Watercolour.

Then I tried to move very fast, and come up with five solutions for each problem, using each preoccupation (or some aspect thereof).

Here’s a bit more detail from the “story about poison” row. Left is the Ground Rocks column, right is Watercolour. As with most exercises like this, the ideas immediately start picking up on other notes and ideas — a bit of writing I did on a visit with friends to MassMOCA, environmental rules around paint at a workshop, conversations, etc.

Even a basic dalliance with the maths would have suggested this would take some time. On the other hand, a time limit (even if it is just daylight) and a ridiculous number of cells to fill can encourage invention, if not legibility. But it passes the time.

My favourite entry is still the concept of “Jurassic Park meets And Then There Were None“, although of course considered on some levels they are almost the same story.

A “Mr Fox” reference, not an inspirational quote (except to the extent &c…)

Making lists (or decks, or the idea of a deck, or self-shuffling Excel documents) of common elements is a very soothing procrastination activity.

I’ve made them of favourite lines, key tropes, patterns I’ve noticed in my own working habits, images I return to, favourite stories I like to use as narrative myths/templates, art styles — even just parallels between a set of books recently read (here, boarding school mysteries).

They’re a pleasant way to test what you already know, and to analyse what you love.

In case you were interested, the source texts were primarily: Murder Most Unladylike — Robin Stevens; Cat Among the Pigeons — Agatha Christie; The Hippopotamus Takes Wing: A Farrago — Simon Oke; and Picnic at Hanging Rock — Joan Lindsay.

They are also useful for all sorts of games and ways of knocking ideas against each other until they give off sparks.

Below is an experiment where I used a list for quite another purpose from its original intention. The list was a set of notes I’d made on things to strengthen in my own writing. But instead, I used the items as parameters for a quick set of repeating pattern ideas — and of course those turned into yet another set of card ideas (among other things).

You can of course buy or repurpose pre-made kits (story dice, Dixit cards, Tom Gauld’s plot generators, etc). But sometimes just the making is the illuminating part of the exercise. 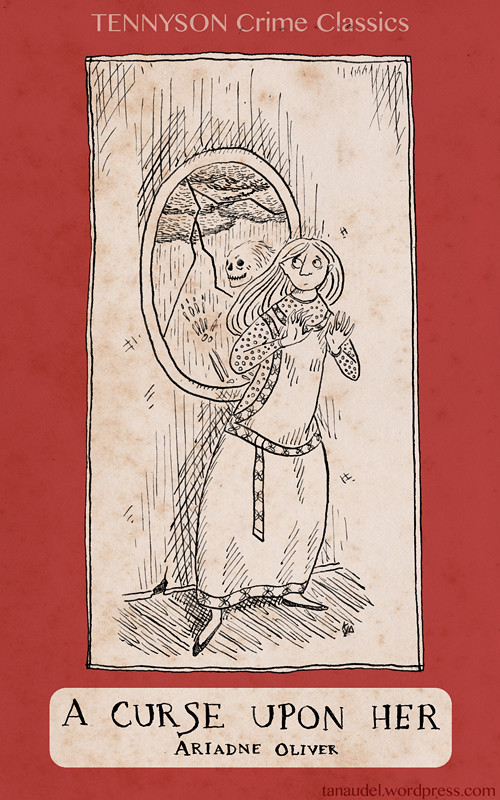 In some other universe, Agatha Christie’s Ariadne Oliver lived, and her crime novels were illustrated by Edward Gorey.

The title is, of course, from Alfred, Lord Tennyson’s “The Lady of Shalott”, which also provided the title for Christie’s novel The Mirror Crack’d from Side to Side, and two previous Illustration Friday mock covers: 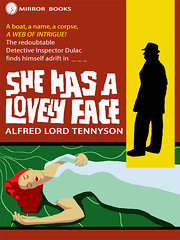 To War with Whitaker – Hermione Ranfurly: Funny, acerbic, remarkable diaries of Hermione Ranfurly (I read her childhood memoirs in February) who followed her husband to the Second World War and worked for a series of generals in Egypt and Italy. Her experiences, the contrasts between war and liesure, bureacracy and youthful high spirits, the privileges her rank and youth brought her and the economies needed because of relative poverty make it a delightful read. But by the time the diaries return, self-consciously, to the peaceful country setting in which they started, it is clear that the world, politics, culture and society have changed.

All the President’s Men – Bob Woodward & Carl Bernstein: The account of the breaking of Watergate by the reporters involved. Gripping and entertaining, but also fascinating for the changes (and lack thereof) in reporting and technology!

Der Tod auf Dem Nil – Agatha Christie: This book is incorrectly titled. It shouldn’t be “Death on the Nile” – it should be “People annoy each other indefinitely on the Nile.” Or possibly “People don’t die on the Nile”. I was sure the death happened earlier in the book last time I read it, but my sense of time may have been dilated by reading it in German.

Death in the Stocks – Georgette Heyer: So much better than the last Heyer crime novel I read – this was frothy and fast paced and entertaining and modern. I’m often surprised by how current books written in the ’20s and ’30s feel and how old-fashioned the ’50s seem. I know *why*, but if you just read books written then it sometimes feels as if the decades came in the wrong order.

Strong Poison – Dorothy Sayers: I’m sneaking up to reading Gaudy Night (and the review of it on Tor.com), on principles of delayed gratification (and also because, as Tor.com said in relation to that novel, you can reread a book any number of times but you can only read it once for the first time). I enjoyed that this book opened with the summing up in court, but mostly I enjoyed the vigorous opinion of the characters on the correct way to make an omelette, and have been making omelettes (successfully!) a great deal since. In fact, I might have one for dinner tonight.

Five Red Herrings – Dorothy Sayers: Too many accents! This circular crime novel with its welter of accents and geographical features and eccentric artists at times felt too convoluted and self-indulgent, but it was Lord Peter Wimsey and many eccentric artists, so it wasn’t  bad. Possibly I wanted more cooking tips. I did like that she had a character discover a vital clue at the beginning and then told the reader that they’d have to work out what it was for themselves and if they’d been paying attention they’d be able to. And I did! Well, I had a strong suspicion, but I’m not an oil painter so I wasn’t sure.

Also: I also read several Strand short crime stories out loud to my father, include Kipling’s “Faery-Kist” and Sayers’ “The Hanted Policeman”, which was my first Lord Peter Wimsey story, and so far my favourite.