This Thursday night 22 December, all night, Avid Reader and Where the Wild Things Are (in West End, Brisbane), are having their all-night shopping extravaganza. There will be authors and books and drawing and cocktails at the bar, and money being raised for the Indigenous Literacy Foundation.

This ran for the first time last year, and was great fun then (sketches from that are here), so if you can, I recommend coming along!

(And I’m giving a map workshop in Banyo that afternoon, too.)

Darryl Jones’ Curlews on Vulture Street is out this month! He will be in conversation with Christine Jackman at Avid Reader in Brisbane this month, on 14 September 2022 — and for those attending in person the original artwork for my illustrations will be on display (and available!)

Despite the noise, heat, dust and fumes, the ceaseless movement, light and toxins, many birds successfully live their lives among us. And not just furtively in the shadows. Ibis steal our lunch, brush-turkeys rearrange gardens and magpies chase us from near their nest.

From blackbirds and sparrows in his childhood country town to brush-turkeys in the suburbs, Darryl Jones shares a fascinating story of curiosity, discovery, adventure and conflict, played out in the streets and backyards of Australia. He also provides rare insights into the intimate lives of some of our most beloved and feared, despised and admired neighbours. Magpies, curlews, ibis, lorikeets and cockatoos will never seem the same again.

Darryl Jones is a Professor of Ecology at Griffith University in Brisbane, where he has been investigating the many ways that people and wildlife interact for over 30 years. He is particularly interested in why some species are extremely successful in urban landscapes, while many others are not, and how best to deal with the ensuing conflicts. More recently, he has been trying to understand more about the humans that also live in cities in large numbers, and how they engage with nature. This has led him into the strange and fascinating world of wild bird feeding and has resulted in collaborations with other researchers all over the world. He has published six books, including The Birds at My Table and Feeding the Birds at My Table.

Bookings need to be made separately for each event, and links to the Avid Reader events pages are below:

(We’re watching outbreaks so all events are, of course, subject to the obvious possibility.)

The video of the Avid Reader launch of my Flyaway (from August) is now up on Avid Reader’s YouTube channel — it starts with an introduction by Garth Nix, followed by a really delightful conversation with Fiona Stager.

Incidentally, if you’re not from Brisbane but are chasing a personally signed copy, your best bet is to contact Avid Reader or Pulp Fiction — they know (or should do, but do tell them) that I’m happy to get myself to the store within the following week and sign things (maybe let me know you’ve ordered the book, too). There will probably be a similar arrangement with Travelogues.

There are also (at the date of this post) signed copies in-store at Avid, Pulp, and ReLove Oxley.

For obvious reasons, Flyaway has had a fairly online release into the world, but one of the things I’ve been able to leave the house for was to draw on the windows at Avid Reader in West End, Brisbane (through whom I’m having an online event with Garth Nix and Fiona Stager on 18 August).

I went over on Friday afternoon, Sarah rearranged bookcases and I drew placement dots around them, then she pulled them out while I made vaguely helpful movements, and then I stood back, drew two great long swirly lines in chalk pens, and started filling in the rest (beginning, naturally, in the very middle at the top, which is naturally where to begin when working out how to use a new medium). Placing branches and birds, filling in space with wattle and lemons (lumpy bush lemons).

Three hours later, the sun was down, and I was done. It looked beautifully silvery at night — I’d love to try something like this, one day, with an etching effect.

One of the reasons I’m glad I didn’t draw up a detailed plan in advance is that I would have stressed myself into procrastination. But also there were location-specific elements I would have forgotten or had to adapt to — safety stickers and a sale table and, of course, a Georg Whelan painting on the outside of the window (I was drawing on the inside). With a design like this, it was nice just to flow fairly organically around (and through) those elements.

It also let me add in little hints and secrets from the book.

Here it is by daylight — but if you want to see it without reflections, you’ll have to get down to Avid Reader while the drawing is still up.

Flyaway is already out, and can be bought through all good bookstores! And the Australian launch event is through Avid Reader on 18 August (Brisbane time), with an introduction by Garth Nix and then conversation with Fiona Stager.

Last week was the USA launch event for Flyaway — a most delightful conversation with Kelly Link, hosted by Tubby and Coo’s Mid-City Bookshop (New Orleans) and Candice Huber, in which we discuss visual description and chickens and plan road trips to Louisiana (one day).

Kelly Link, as well as being Kelly Link, is of Book Moon Books (Northampton, Massachusetts), who are some of my favourite people, and here is their newsletter write-up of Flyaway (a newsletter worth subscribing to, while you’re there):

The video is now up on Facebook, so you should be able to watch it through there:

And next week, on the 18th of August, another favourite bookstore (check the acknowledgments, incidentally), Avid Reader bookstore is hosting the Australian launch event: an in-conversation with Fiona Stager, with an introduction by Garth Nix! More on Avid Reader and its windows soon.

2020 has its advantages! Going online means two launches for Flyaway, with some favourite people and no jetlag!

The USA event is through Tubby and Coo’s on 6 August (New Orleans time), and I will be in conversation with Kelly Link.

The Australian event is through Avid Reader on 18 August (Brisbane time), with an introduction by Garth Nix and then conversation with Fiona Stager.

The booking page is here: https://avidreader.com.au/events/kathleen-jennings-flyaway 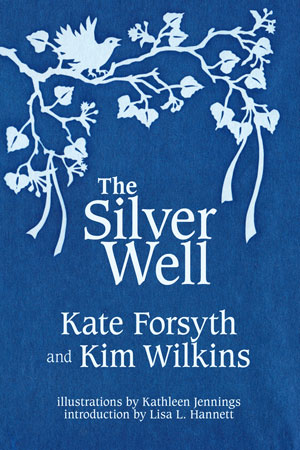 “One English village. Two thousand years of stories. Best-selling legends of Australian fantasy Kate Forsyth and Kim Wilkins have teamed up in this collection of 7 incredible stories, all original and never-before published.”

I’ve had the honour of creating the cover art and internal illustrations for this brand new collection by the inimitable Kate Forsyth and Kim Wilkins.

It is currently launching around Australia, with the Brisbane launch next Wednesday 29 November at Avid Reader (free, but bookings essential). That launch will be accompanied by an exhibition of the original cut paper/cyanotype cover (if I can get it to lie flat) and pen-and-ink internal illustrations.

The Sydney launch will be on 30 November at Galaxy Books, launched by Garth Nix (but the only art will be in the books). 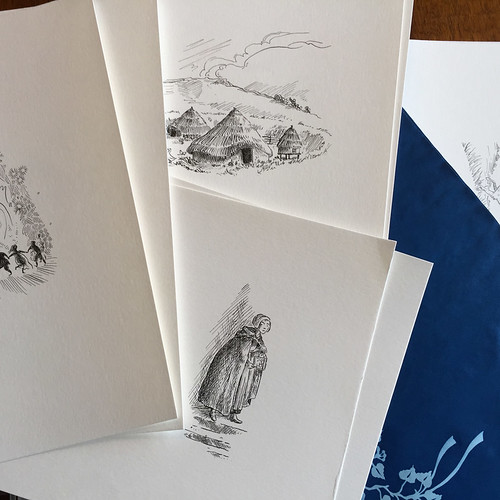