I posted previously about the t-shirts which were available for Continuum X. Now I am back from Melbourne and the convention, which was wonderful, I can show you all the art for it.

First, the sketches. The theme for Continuum X (this year’s Natcon) was “dark carnival” (later “Carnival of Lost Souls”), which was a lot of fun to play with. I’d acquired some books of Australian circus history and started playing around, going sideways from the recognisable images in those, and getting in a Banjo Patterson reference as well.

The original brief expanded at this point to include designs for the postcards/flyers and so forth, so I worked up the acrobat-with-stars and the ringmaster. Here are some variants. 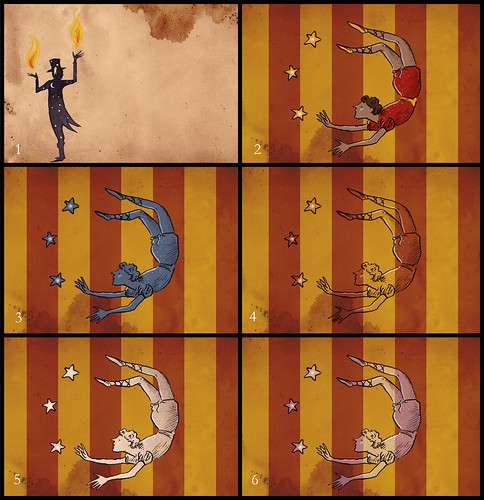 The committee suggested a darker colour scheme, and this is the final design for the tumbler (with stars swapped out for cards): 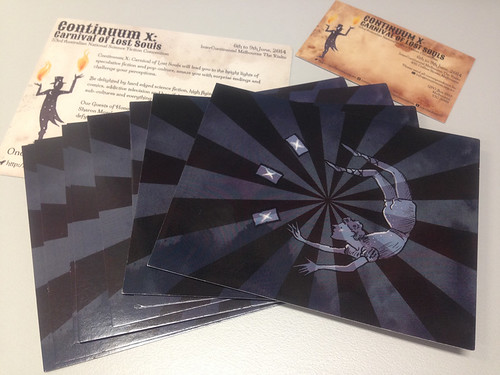 I’ve already shown a version of the program cover on the t-shirt post. The final was all pen-and-ink line drawings (including the lettering), compiled and given flat colour and texture on the computer (Photoshop Elements as usual, if you’re interested). My original sketches had little headings such as “The Amazing Bird-Boy”, “See the Future”, “Genuine Mermaids”, etc, but I dropped them out as they cluttered up the final design too much. 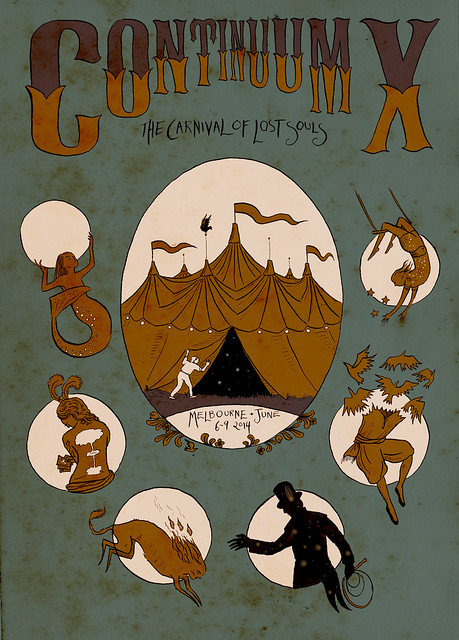 I’m still really happy with this. I’ve also ordered a few test prints on various art papers and it came up gorgeously velvety.

And finally the brief was expanded again to use some of the artwork on the trophies for the Ditmar awards! This was also very exciting, and I think the way the committee printed them on the back of clear acrylic came up really well – here’s my contributor copy: 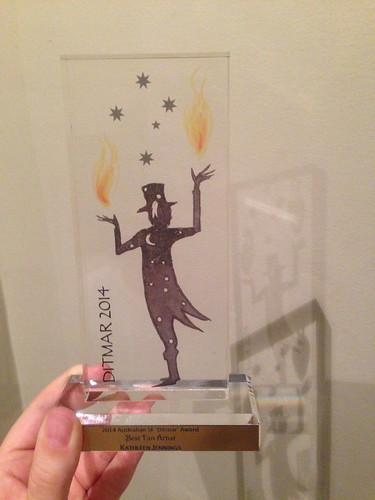 Congratulations to all the award winners, and to the convention committee and volunteers! It was a lovely convention – I found it very relaxed, with lots of hilarious and interesting panels, lunches and evenings in the bar. Too much talking to sketch a great deal, but here are my pages for the cover art pose-off panel, based on the notable efforts of Jim C Hines (guest of honour and judge of the panel).

Don’t forget – Continuum X is on in Melbourne this 6-9 June (it looks to be awesome), and t-shirts are available on the Continuum RedBubble page (they may not be available at the convention, so this is your chance to get one!). They are based on the convention book cover design (by me, but t-shirt money goes to the convention) and there are three options (multiple shirt colours and styles available).

And the Amazing Bird Boy: