In celebration of the launch of the Georgette Heyer, History, and Historical Fiction, which contains my chapter, “Heyer . . . in Space! The Influence of Georgette Heyer on science fiction”, here is a Georgian Dalek (only shown previously to supporters of the calendar over on Patreon, who occasionally get glimpses of other works in progress).

This drawing is for the splendid, risqué (though really not), human, ridiculous Memoirs of Harriette Wilson, infamous Regency courtesan but also basically Lydia Bennet if she had lived her best life.

You can find the book on Project Gutenberg, but I recommend the edition with Lesley Blanch’s introduction and the correspondence with Byron in the appendix.

I know this is Harriette Wilson, rather than Heyer, but as proof of my credentials, Heyer has featured in the Dalek Game previously (from ages ago, before I finally worked out that I do in fact also like recently-written Regencies (although still for largely for other reasons than I enjoy Heyer), and fell among romance writers, and started playing in the fringes of that genre, too.

I still do draw the Daleks occasionally! I’m slowly building up a stock to start posting again, but occasionally supporters of the calendar over on Patreon get to catch a glimpse of various works in progress.

A Dalek! This is for one of my very favourite books, the gentle, chaotic, loving My Family and Other Animals, Gerald Durrell’s autobiographical account of an erratic English family relocating to Corfu in the 1930s. (I have finally picked up a copy with the dust jacket shown at that link).

If you’re looking for an adaptation of it, there are several. I think the series are flawed because this is not a story which can be drawn out. All the urgency of it comes from knowing that the overlapping, unfraught episodic adventures must end at the back cover. For this, among many other, reasons, my favourite adaptation is the delightful 2005 BBC movie, which stars Imelda Staunton, Tamzin Merchant, Matthew Goode and Russell Tovey, et al.

Ah, remember the Dalek game? I have been drawing them again, from time to time. At the moment, I’m just showing them to patrons over on the Calendar Patreon, but when I’ve got enough of a backlog I’ll eventually make more of them public. For now here’s a teaser.

This is for Paul Brickhill’s biography of Douglas Bader, Reach for the Sky, one of the many military books and movies my father raised us on, and probably the one which got me interested in early-ish aviation. I haven’t seen the movie for ages, but I remember it as being both thrilling and charming. Bader was a… colourful character.

Previously released Daleks can be seen here: the Dalek Game. 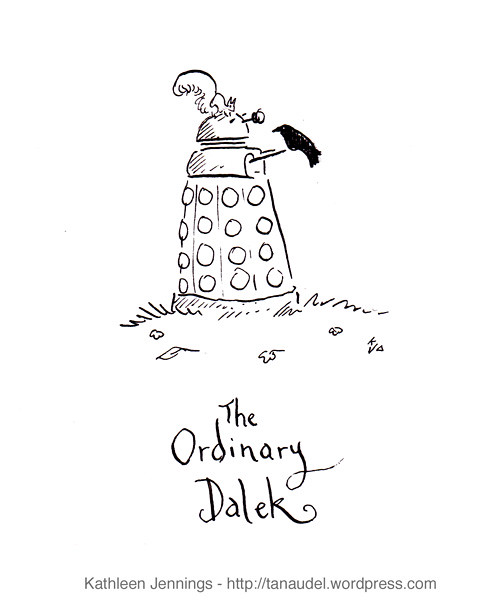 Another rediscovered instalment of the Dalek Game! This one was for M M Kaye’s wonderful fairytale, The Ordinary Princess. The best princess, the best prince, the best wicked (or disgruntled) stepmother, the best names. Approached in my affections only by E Nesbit’s “Melisande, or Long and Short Division”, which loses because M M Kaye’s illustrations (her own work) are just so charming. 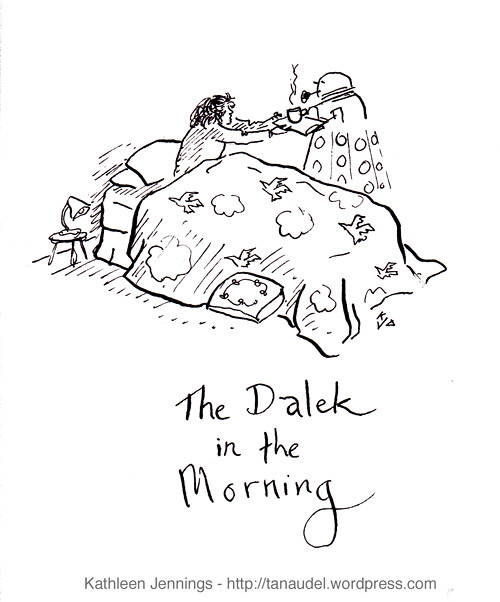