My interview with Mike Zipser on Faster Forward Live is up on YouTube, talking about art and Flyaway and all sorts of things — and while we were missing catching up in person, I think we got the chance to talk to each other with far fewer distractions than we would have at a convention!

A few upcoming events (all online):

The video of the Avid Reader launch of my Flyaway (from August) is now up on Avid Reader’s YouTube channel — it starts with an introduction by Garth Nix, followed by a really delightful conversation with Fiona Stager.

Incidentally, if you’re not from Brisbane but are chasing a personally signed copy, your best bet is to contact Avid Reader or Pulp Fiction — they know (or should do, but do tell them) that I’m happy to get myself to the store within the following week and sign things (maybe let me know you’ve ordered the book, too). There will probably be a similar arrangement with Travelogues.

There are also (at the date of this post) signed copies in-store at Avid, Pulp, and ReLove Oxley.

Garth Nix‘s new novel, The Left-Handed Booksellers of London, is just about to come out! He’s doing an online event through Where The Wild Things Are, and I’m very excited to be the person who gets to ask him questions!

I’ve been a fan of Garth Nix for a long time (and although I haven’t illustrated his books, I have illustrated Frogkisser character cards for him, and he introduced my Flyaway launch for Avid Reader, so it’s a huge honour to (a) get my hands on this book and (b) ask him about it, for a dedicated period of time during which he cannot get away!

It’s on 1 October 2020, 6:30pm AEST (Brisbane) time, and you can sign up through the bookstore website: https://wherethewildthingsare.com.au/events/garth-nix-the-left-handed-booksellers-of-london

2020 has its advantages! Going online means two launches for Flyaway, with some favourite people and no jetlag!

The USA event is through Tubby and Coo’s on 6 August (New Orleans time), and I will be in conversation with Kelly Link.

The Australian event is through Avid Reader on 18 August (Brisbane time), with an introduction by Garth Nix and then conversation with Fiona Stager.

Last year, Megsy Caddy commissioned to make a silhouette illustration of her D&D party, for their Christmas present.

The party’s name is either The Chosen Ones or Val’s Vanquishers, but in either case they’re on twitter as twitter.com/DnDOut. The characters are Fable (Jenn), Val (Serena), Jeb (Michael), Veritas (Ted) and Aana (Meg).

Character illustrations are great fun — trying to catch all the details of a written description plus a sense of the personality of a character in motion in their story (here are some I did for Garth Nix).

Changing a written description to a silhouette character representation is, however, a different process. It isn’t just about making them distinctive in silhouette, as separate from other characters. It’s about trying to get all those details in.

And because they aren’t in a scene, in motion, engaging with the world, which most of my silhouette pictures are to some degree, I can’t rely on those clues either.

The first time I tried this was for Trudi Canavan, and the release of Successor’s Promise.

A D&D party portrait, however, adds an extra layer of complexity in that the characters are designed by very different personalities, and described in correspondingly different language.

Additionally, it was a group portrait, which meant I had to include just enough character interaction to link them, while keeping it relatively static. Illustrating a particular scene would have required different exclusions and inclusions.

Here is a glimpse of the process — integrating fairly organic/medieval lines with arcanomechanical details presented a challenge best overcome by harassment with a beribboned lute.

The final silhouette. I scanned it, tidied it up into a solid black image digitally, then added the dash of texture and, behind the details, blue that you can see in the image at the top of the post.

The next bit is for three reasons: (1) my continued attempt to unite principals of writing and illustration; (2) we make the students come up with writing exercises in one of the subjects I teach, and I figure I oughtn’t to make them do anything I’m not prepared to do myself; and (3) occasionally I teach workshops and this is me thinking out loud. If anyone tries or likes or hates either exercise, I’m interested!

Get someone else’s character description from a book (or fan site, or jot down a description of a friend as if they were a book character) and then try to render them as a static silhouette portrait, including as much relevant information as possible.

Describe a character (your own, or someone else’s, or someone you know) solely in silhouette. Imagine they are stopped for a moment in a doorway with the light behind them. How do they stand, what does the light do to the fine hairs around their neck, what about their clothes or attitude or profile makes them instantly recognisable, anywhere in the world?

(This used to be an occasional discussion in my family (I don’t know why!): If we were separated for decades, by which mannerisms would we recognise each other?)

Note: If you click on a picture, that should take you through to its Flickr page, where you will have an option to view a larger version.

Part One is here: Brisbane Airport and Oslo.

After a last farewell to Dartmoor, a walk along the Cobb at Lyme Regis, an altercation with a lorry near the New Forest (huzzah for steady-nerved passengers and comprehensive insurance), and the GPS in a final effort to establish its supremacy taking us to Arundel Castle instead of the Metropole, Ellen, Delia and I arrived in Brighton for the World Fantasy Convention 2013.

That is Brian Aldiss with the tea.

I don’t sketch at conventions as much as I used to, now that I know more people (one reason being Artist at Large at the Brisbane Writers Festival was so much fun was that I was officially meant to be drawing over talking). So I had a marvellous time at WFC, but did not draw many pictures. Most of my drawing was scribbling ideas during panels, e.g. this during the “Broads with Swords” discussion:

I did sit at the signing tables during the mass signing in order to draw everyone else – I learned last year that was a good vantage point. And one person did come up and ask me to sign a book I have a story in (ahem), so that was thrilling!

Here are two panels  of people you probably haven’t heard of: A YA discussion with Delia Sherman, Susan Cooper, Garth Nix, Neil Gaiman, Will Hill and Holly Black, and Nifty Shades of Fae with Tanith Lee, Joanne Harris, James Barclay, Angela Slatter, Lisa Hannett, Grahame Joyce and James Barclay. There are also a few Irene Gallo cameos in the pages, because I usually draw the people with cameras.

Unfortunately, I was taken violently ill on Saturday evening and had to leave the art reception early to be miserable in my room. The hotel reception sent up Twinings Peppermint Tea as a sovereign remedy. Ellen also plied me with medicinal infusions the next day.

As a consequence, I only have a tiny picture of my art at the show. I will post some better images of the pictures later! 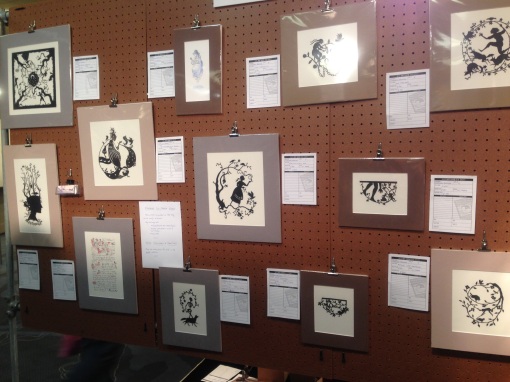 Absence of pictures aside, I had a wonderful convention – talked to a lot of people, mostly, which is the point. It is difficult to narrow down particular highlights, as I keep remembering things and people to mention – charming ladies’ literary dinners (after the ladies in question unpacked our car in a team while I sat trembling in the driver’s seat), operatic serenades over dinner with the Australian contingent, lunches where no-one simply shared common gripes or tried to curry favour but simply waved their hands and discussed shared enthusiasms (stories, Dianna Wynne Jones and Dorothy Sayers). And of course I wasn’t drawing during any of those conversations – I will try to draw you all next time!

Following the convention, Aimee (Aimee L, not Aimee-my-housemate) and I went touring Brighton. I drew Aimee photographing the giant seagulls. We also ate giant meringues. I bought this marvellous panorama history of Aviation (I want the Nobrow Press Leporello series to be longer and also all of them) and we visited the Royal Pavilion, where we both fervently wished for a coffee book on the subject of wallpaper restoration.

The most touching moment was seeing the paintings of the music room when it was used as a hospital for Indian soldiers in WWI. It had the most beautiful ceiling, which Aimee is photographing here. We ate horrible hotdogs on the pier and collected Shelley to go to Thor II, and all the English people in the audience laughed at the scenes in Greenwich.

The next morning, I caught the train to York, en route to Perth and London…