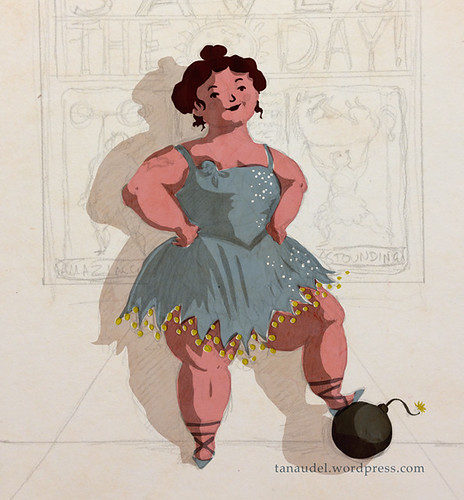 A lady who Gets Things Done.

Digital colours over a pencil sketch, playing with some techniques and influences including (but not limited to) Blexbolex‘s way with overlays and early 20th century Australian circus costumes, particular as recorded in Mark St Leon’s history Circus: The Australian Story.

In other news, so many covers announced this week, making me look very efficient. I will start posting them here soon, or stay tuned on Twitter and Facebook.

The final cover for Cranky Ladies of History (from Fablecroft) has been revealed, and I have permission to share the cover process which, as is usually the case with cut-paper pieces, was quite short!

Here are the initial thumbnail sketches which I sent through to Fablecroft. 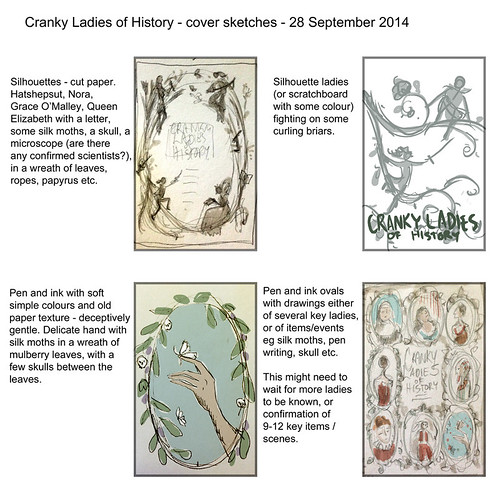 Fablecroft decided to go with the silhouette style. I sketched it in pencil directly onto the back of a sheet of black paper (80gsm). Here are some shots,

Here is the final paper piece.

After scanning the silhouette in (and fixing a few small hiccups) I then tried several different layer effects in Photoshop Elements, added a shadow, and so forth.

I had fun mocking up cover quotes.

Fablecroft decided for the red version, which Amanda Rainey then laid out into the final cover design (this is the full hardback jacket).

History of the Kings of England (Historia Regum Britanniae)- Geoffrey of Monmouth. A 12th-century imaginative, odd, half-familiar, largely invented, entertaining account of Britain from its settlement by Brutus and other Trojans, through a variety of kings – including Arthur and his relatives – and queens and mighty men (some of whom liked to pick up giants, run to the coast and throw them into the sea), adventures and invasions and attacks on Rome, with a detour into the prophecies of Merlin. Such a very different world and view not just of history but of the writing of it.

My Family and other Animals – Gerald Durrell. In 1935, ten-year-old Gerald Durrell and his eccentric family (their relaxed, harried mother, the sensitive writer Larry, gun-mad Leslie and vague, romantic Margo) moved to Corfu, where for five years Gerald grew up in a very haphazard fashion among the people and animals and olive groves. Often I read a book and don’t want it to end, but also really want to know what happens at the end, so rush to get there. I did not want to find out what happened at the end of this book – I just wanted it to keep on doing what it was doing, indefinitely. Such a laid back, (sometimes hysterically) funny, gentle memoir, full of bizarre and lovely stories and descriptions that are always so accurate I could *see* the sea wrinkling around the coastline, or the haze of bees under the olive trees, or the erratic voyages of the family. The book is available in Popular Penguins so you should be able to pick it up for under $10 (Australian), and the 2005 BBC movie (I haven’t seen the miniseries) – though not on the same scale – is very true to the feeling of the book and stars the wonderful Imelda Staunton (as in Dolores Umbridge), among others.

Rapunzel’s Revenge – Hale, Hale and Hale. A short graphic novel retelling of Rapunzel in a fantasy Wild West. Sweet (at times a little too sweet) and fun, but with an edge of tales wilder than fairy tales: folk tales and tall tales and legends of the West. There was more multi-ethnicity in it than I’m used to in fairytales, which was a pleasant surprise (a bit like watching British shows after American ones: not perfect but better) and although I found the art more cartoony than my tastes usually run to, it definitely grew on me. There is an interview with Shannon Hale (on whom I already looked with favour as she had written a novel of my favourite fairy tale, The Goose Girl) by Karen Healey on Girls Read Comics which is the reason I tracked the book down, and I am glad I did.

The Grand Sophy – Georgette Heyer. I like Georgette Heyer regencies: so irrepressible and fun and even if they end in a romance, not romances at all but funny novels full of wit and misunderstandings and vengeance and mistaken identities and carriage races and duels and highwaymen. This was an excellent example, with the poor orphaned cousin come to stay with family in London turning out to be the tremendously confident, independent, capable and irrepressible Sophy, who sets about rearranging everyone’s lives to her satisfaction. It has a wonderful ending, too – a proper, Diana Wynne Jones style, everyone-in-the-cast-descending-at-once, maelstrom, chaotic ending. With escaping ducklings. And a whippet.