This is one of a few four-panel stories I drew as a response to book and movies I read/saw last month: Read and Seen February 2020. (Some of the others are going out on Patreon).

This one was suggested by Emily Carroll’s Through the Woods, Fran Krause’s Deep Dark Fears and The Creeps, and Emma.

This week on Twitter etc. (rings by Janet Kofoed) 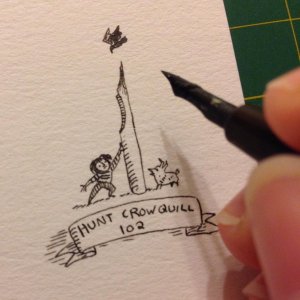 Litographs has a new design out for Jane Austen’s Emma, with art by me. There is $5 off today only (with code EMMA), and I will post some process details in due course but am about to go to Genrecon then World Fantasy so I’m not sure I’ll be near my computer a great deal in the next few weeks. 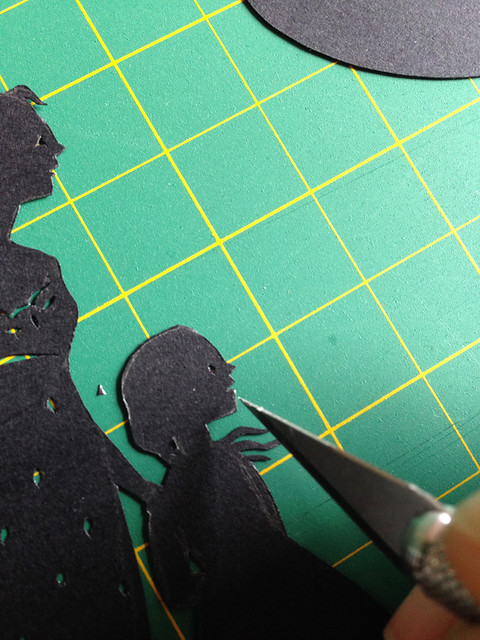 I have a new design out for Litographs! This time, it is for Jane Austen’s Sense and Sensibility. I thoroughly enjoyed sketching up the thumbnails for this. I love how gentle the contrast between the sisters is in this novel (as compared to, for example, Pride and Prejudice). Neither course of action is only fraught with danger or guaranteed to bring happiness. And Edward is just so decent and nice. And also I hope Margaret grew up to be an explorer. 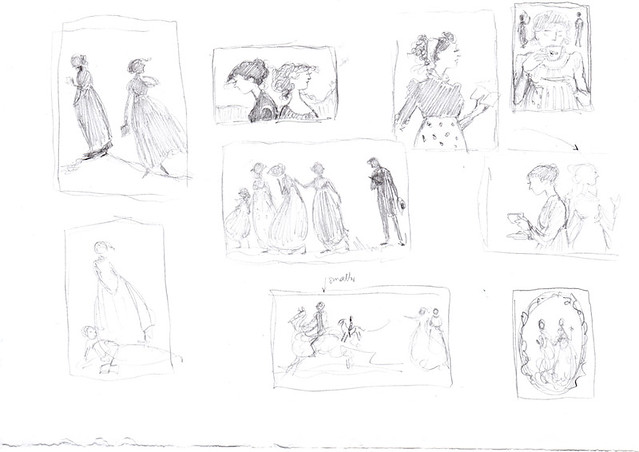 Here is the cut-out design. I’m glad Litographs went with this one – it is very easy to concentrate on just Marianne and Elinor, but they are almost the median point of the story. Everyone else takes sense and sensibility to greater extremes: Mrs Dashwood, who can’t grasp the idea of economy, Mrs John Dashwood who grasps it too well (the gradual bargaining-down of her husband’s proposed generosity is just awful and masterful). Willoughby, who feels too much. Edward and Colonel Brandon who are similarly governed by good sense, but with rather different impacts on the people they love. Margaret who is marvellous. Anyway, back to the art. 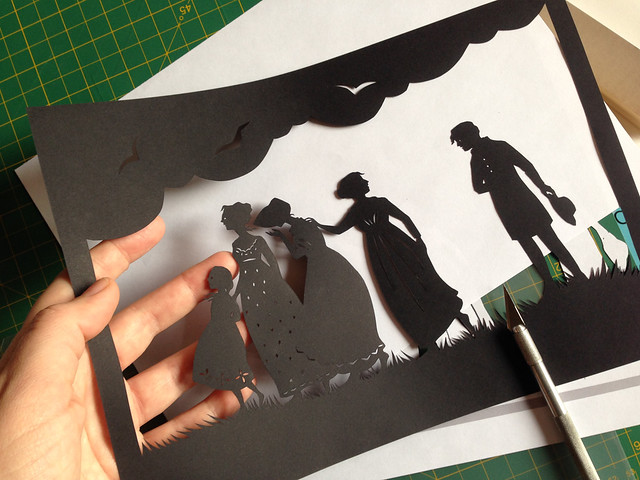 The clouds would not be in the final (I would invert the birds), but I like to keep the pieces together where possible, to create a single picture, in case someone would like to frame it.

And here is the design on a tote. It also comes as a poster and a t-shirt, and in different colourways. 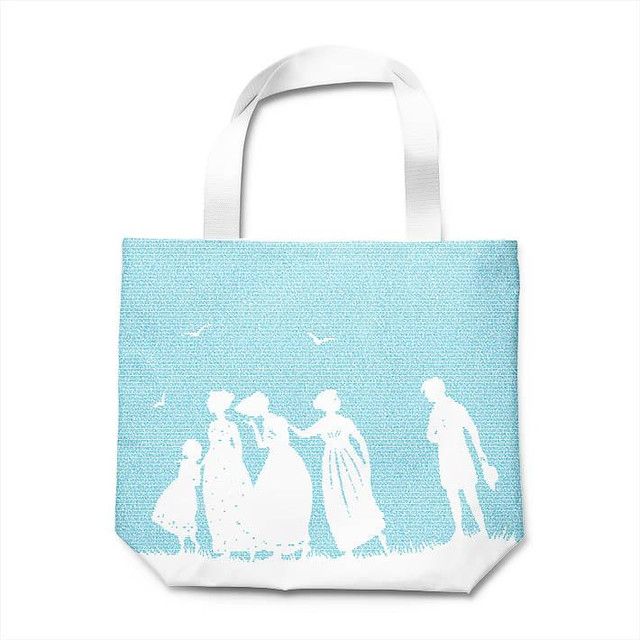 Please buy lots. I don’t get a cut, but I do have a wish list of classics I’d like to illustrate, so if you buy these they might get me to do some more.

Lydia Bennett, one of the least reticent of Austen’s characters, is rapidly becoming my favourite to draw. She’s the most appallingly selfish girl, but utterly consistent in her thoughtlessness. I enjoy the variant readings of her character (does she deliberately set out to ruin her sister’s reputations in childish revenge?) and she frustrates me whenever I read Pride and Prejudice (which as it is one of my father’s favourite books I do frequently), but each time I draw her I like her more than before.

So this is a very… pink collection of Lydia sketches. I see Emma and Marianne as being much pinker girls, generally, but these sketches turned out to be a very bubblegum reading of her character, so it seemed apt.

You can see a larger version here on Flickr.

This instalment of the Dalek Game is for Halloween and Washington Irving’s Legend of Sleepy Hollow. There is a lovely edition illustrated by Arthur Rackham, and this Dalek is encountering Rackham’s Ichabod Crane.

Growing up in Australia, Halloween was not an event – my mother, however, had many stories from her childhood in America, so my image of Halloween is in soft nostalgic shades, being made up of those tales, the costumes in E.T. and readings of poor Ichabod Crane’s misadventure with a pumpkin in Sleepy Hollow.

Australian pumpkins are very different from American ones, but I still consider them an unsettling vegetable. In my experience, they climb trees and are often found hiding under the bedclothes – I am not the only visitor to my parents’ house to have had this encounter.

It is 200 years since the first of Jane Austen’s novels was published. I was away from my usual equipment, but drew the following as part of the general spirit of celebration on Twitter this morning (aware that the first published was not P&P):

In other news: I did manage to get a picture up for last week’s Illustration Friday: Fuel (because not everything is about Daleks, yet). There have been some lovely reviews of Steampunk!, and this one from Karen Meisner at io9 mentions my comic.

Elizabeth, feeling really anxious, was determined to go to her, though the carriage was not to be had; and as she was no horsewoman, walking was her only alternative. She declared her resolution.
“How can you be so silly,” cried her mother, “as to think of such a thing, in all this dirt! You will not be fit to be seen when you get there.”
— Pride and Prejudice, Jane Austen

I have been largely out of action for the last two weeks, but have several projects to do, so I’m warming up on some Regency sketches (pen with quick digital colour) based on a variety of fashion plates from the era:

The January blog header is in keeping:

In other news, Christmas was merry. I have been between jobs for 2 weeks and would have been climbing the walls if I hadn’t hurt my back. I started my new job today (yay!), but yesterday I twisted my ankle. I have at least been writing – it is easier to do at odd angles – and my short story “Mouseskin” has gone to Fablecroft’s After the Rain anthology! The rain has slowed down here – in fact, after a cold November and cool December the sun is blistering – but flood waters are still rising across Queensland. If you want to give to the Salvation Army, they accept specific donations, but Red Cross do not – they are instead in charge of distributing the Premier’s Disaster Relief Fund.

Here is an easy, very Queensland salad which people seem to like (at a neighbourhood Christmas party, one of my neighbours sat down with the serving plate and a spoon and polished it off). It is also very fast:

Buy cooked peeled prawns and chop them into 2 or 3 pieces, pile them on a pretty glass plate with diced fresh mango and diced Danish fetta, drizzle liberally with sweet chilli sauce.

Another scratchboard image. On Saturday I finished reading Pride and Prejudice to my father (his choice) and we started Sense and Sensibility. The last third of P&P is so full of anxiously-awaited letters that it seemed an eligible choice for this week’s Illustration Friday topic: Worry.

Our edition has very handsome woodcut illustrations, so I tried to echo some of those techniques in this picture and while I couldn’t manage anything approaching the level of detail and control in those, I think it is a lot better than my first scratchboard attempt.

I used upholstery needles for scratching, cross-hatched the background and scraped away the excess with a pocket knife which was ideal.

I showed this to my father and he said, “Oh. A granny reading a newspaper.” So I can handle honest opinions.

The Jane Austen Book Club (twice – double booked, not enthusiasm) – I am operating on the assumption that the book was better, because if it wasn’t they wouldn’t have made a movie. Some good moments shoehorned into a woodenly-scripted frankenstein’s monster of preachy literary allusion which devalued Austen, failed to succeed in pointing out that some men like Austen, made cringe worthy attempts to do so and ended with cheese. However Hugh Dancy’s programmer, SF-geek, over-caffeinated, alternative-energy character was really great, and I could almost sit through the movie a third time for him alone. Among many things, it was great to see an avid SFF reader (first met at an SF convention) with a slightly bizarre and intense outlook on life who was funny (and true!) but not made fun of and who succeeds in promoting science fiction, female authors of science fiction, science-fiction-as-real-books and persuading another character to stay up all night reading Ursula Le Guin and prompt my sister to ask if I had any of her books. That blew me away.

Juno (again) – Still like it. It falls somewhere between Thankyou For Smoking and My Girl.

St Peter’s Chorale – Some beautiful pieces, including a haunting Australian composition by Sarah-I-did-not-write-her-name-down in which the voices at times sound like didgeridoos.

The King of Kong – I won tickets to a preview screening, but it is worth paying to see even, and perhaps especially, if you don’t know much about video gaming. Well told, with marvellous characters who at times are so appalling that it is a shock to remember they are not fictional characters at all, but real people (allowing for a documentary director’s viewpoint), and often very funny. The story continues after the credits.

Moulin Beige – I’m not sure cabaret is my thing, but there were some inspired moments (the Two Men in a Box skit which felt like something out of Cirque du Soleil, but without acrobatics or a budget) and The Joynt has excellent chips.

There Will Be Blood – This would have been a better movie if they kept the original title. It would have drawn it together thematically and given it relevance instead of just being a bald statement of the plot. It’s like calling Die Hard “There Will Be Sardonic One-Liners” or Juno “There Will Be A Baby” or Snakes on a Plane… oh wait. Only There Will Be Blood sounds like a pirate movie, so more like, “Avast! A Swaddled Infant” or “Arrr There Will Be Defeated Terrorists”. Deb disagrees with me on this. I am not ruling out my opinion may be influenced by the lingering disappointment of discovering (before I saw the movie) that the title was not a subtle allustion to The Princess Bride. There was some vivid acting, but though never boring the movie was not fulfilling. It reminded me of The Aviator, in which acting calibre could not redeem a movie that otherwise only had its historical overview of a phenomenon to recommend it. But Paul Dano (Little Miss Sunshine) was awesome! That boy can act!