The original of the Be Bold, Be Bold paper-cut design has sold, but the white-on-black print is available on Redbubble, as an art print or other things (e.g. a hardback notebook which I think looks rather striking).

The other, more fox-centric, “Be Bold” (originally a calendar page) is also available as a print, etc, too.

Light Grey Art Lab, as well as its many other marvellous exhibitions, is currently exhibiting and selling Small Art For A Big Cause, featuring many of their regular artists. You can find the images on their Instagram (always worth following in any event) under #smallartforabigcause or on their website, and framed prints can be ordered from the Light Grey shop.

My piece, Be Bold, was inspired by the heroine of “Mr Fox”, and other fairytale ladies.

It began, of course, as a silhouette:

It is available for a limited time through the Light Grey shop.

Update: The Light Grey prints have finished, and the original art has sold, but the design is now available in white-on-black through Redbubble as an art print, but also on notebooks, etc. 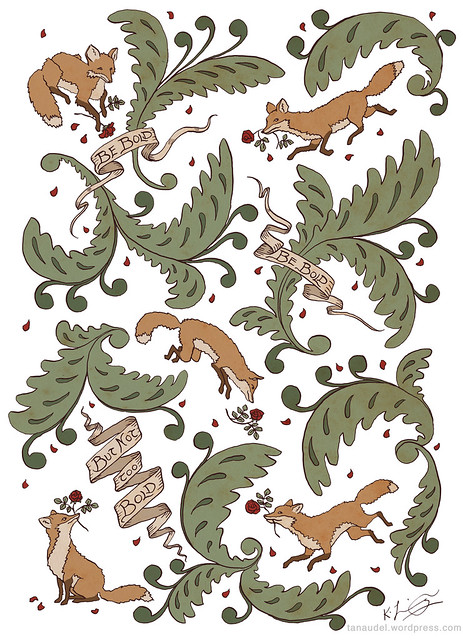 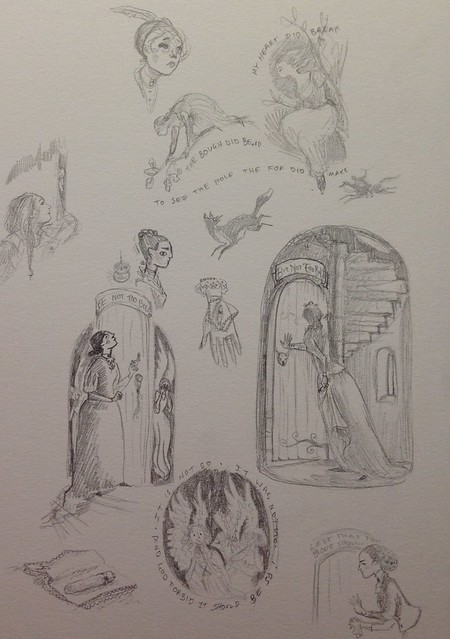 Due to circumstances I am temporarily parted from some of my art materials, so here, for Illustration Friday topic Smart and the Australian Fairy Tale Society‘s fairytale-of-the-month “Bluebeard” are pencil sketches of Lady Mary and The Girl Who Got Up the Tree: two of the clever heroines of Bluebeard-class (or slasher-fairytale) tales, who reveal through riddles their lovers’ perfidy. (You can see a larger version on Flickr here).

(There’s an A on the handkerchief with the severed finger because I misremembered the heroine of “Mr Fox” as Lady Alice).