This observation journal activity is one I’ve mentioned before (see: Sketching with words) — looking at one thing and finding ten or twenty ways to describe that particular object. It’s good for long drives, and also for sitting still, and for breaking open the world a little bit. (And for very famous poems.)

In this case, I’d gone down to the creek at the bottom of my street in the late afternoon. I’d been too twitchy to simply sit (this must have been after a deadline), but it was a lovely way to look long and deep at just one tree, and relax, and play with words.

And it didn’t matter if the descriptions wouldn’t work for a given context, or felt overwrought. That was part of the game.

As mentioned in the post Sketching with words, I used this approach in working out some of the descriptions in Flyaway (available through Tor.com (US), Picador (Aus), and through all good bookstores).

But if you like even less narrative, and particularly if you like poetry that is lists of descriptions, my Travelogues: Vignettes from Trains in Motion (available from Brain Jar Press and other good book places) is just such a visual sketchbook:

Also, I’ve just started setting up a mailing list. It won’t be a newsletter — only the occasional email for any major updates (publication announcements, exhibitions, etc) and rare round-ups of things you might not want to have missed. If that’s for you, the (extremely early version of) the sign-up page is here:

I’ve only just set it up, so definitely please let me know if anything goes wrong!

– A Treatise on the White Blood Moon
– A Guide to Whales (with Whaling Runes)
– The History of a Hearthside Ghost
(Inscribed: To She Who Haunts Me Most)

Of the books you requested, these
Are currently in stock, so please
Find them enclosed. We will retain
Your list on the offchance we gain

– A first ed. Necronomicon
– A Tour Guide On the Rubicon
(Please write, if others spring to mind).
Sincerely, yours, the undersigned. 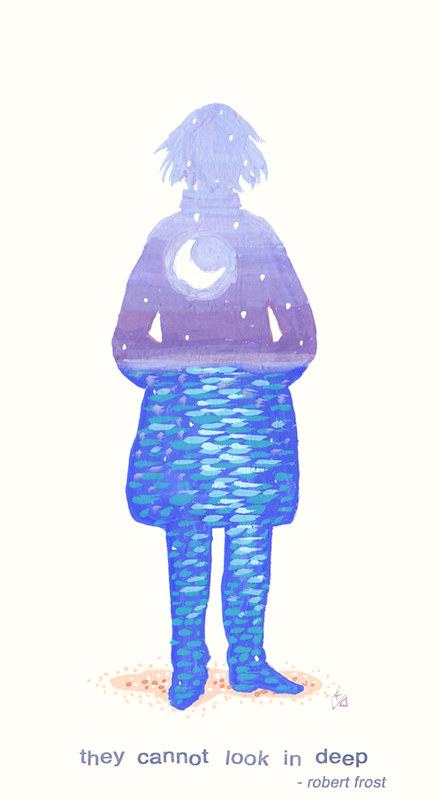 A small gouache painting for this week’s Illustration Friday topic. It is for practice with actual paint, because I need it. I do love the effects that can be got with gouache, and am gradually working out how to do the getting. I’ve also put it up as a print on Redbubble, to test the paper stock.

I chose the image off a tangent from Frost’s poem “Neither out far nor in deep” (which I love, although I imagine it in much softer grey tones, and the poem is by daylight, and this may be a deliberate misinterpretation – but then, it’s poetry, and there’s scope for that).

Neither Out Far Nor In Deep – Robert Frost

The people along the sand
All turn and look one way.
They turn their back on the land.
They look at the sea all day.

As long as it takes to pass
A ship keeps raising its hull;
The wetter ground like glass
Reflects a standing gull.

The land may vary more;
But wherever the truth may be-
The water comes ashore,
And the people look at the sea.

And on a slightly different note, here are some bonus mermaids, to use up the paint (mermaids don’t shave). 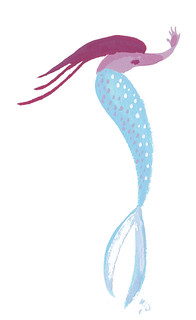 It has been weather for moths and lightning. Oppressive spring days burn scarlet with bougainvillea, gold with silky-oak, and rise in a haze of blue and purple smoke as the jacarandas put out their pale, leafless canopies. The nights are still and humid, or restless with a wind that is warm as blood and carries no relief, only a note of rising panic. The house, a cage of wooden openwork, fills with moths – sober desert camouflage moths, moths like lace, like cigarette dust, horned gothic fantasies, dusky rose plush – fluttering and clinging and blowing across the floor.
Storms come swiftly and inevitably. First the heavy, slow, warm rain, then pure white lightening which lights the night pale blue, then the insistent hail.