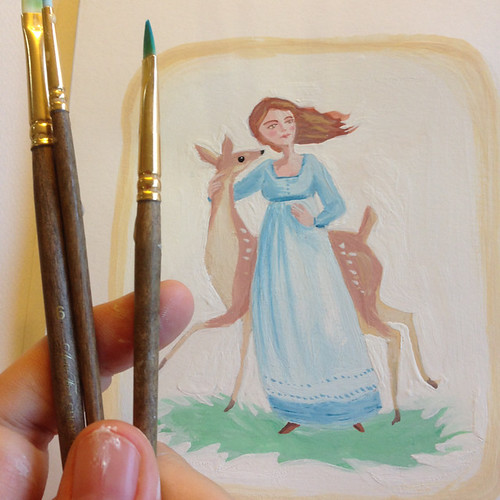 Here’s a little gouache painting I did to practice deer (and use up paint!) – it’s ever-so-slightly fanart for the game “Kiss Me Deer” as played by the Bennet sisters in the book of Pride & Prejudice & Zombies).

It was also preparation for another painting I was making as a gift (that one is for slightly more limited circulation, but can be seen at the Duck level & above on my Patreon).

The art of scanning gouache is one which I have yet to study in more detail. Perhaps photography is the way to go. 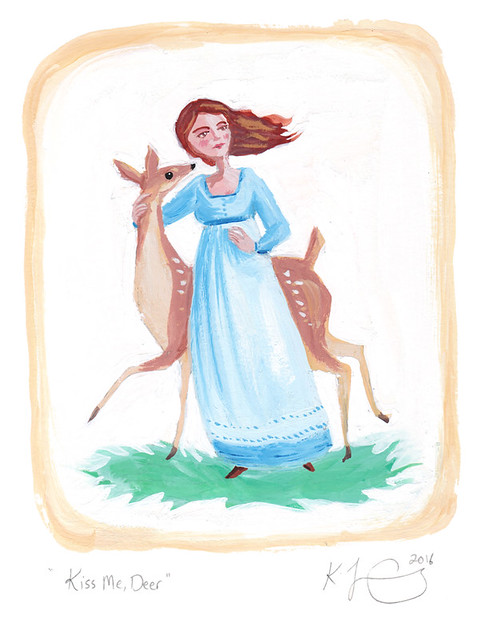 Speaking of the Patreon, if you’d like to throw a dollar in the hat towards the monthly calendar, or subscribe at a higher level to get extra printable stationery and behind-the-scene peeks at upcoming projects, this is a great way to do it. You could even put it on your wishlist!

My rough sketch from memory, and Amber McMahon (photo by Pia Johnson from ECU Daily).

This instalment of the Dalek Game is for Seth Grahame-Smith’s Pride and Prejudice and Zombies.

As you may have worked out, I love reworkings, reimaginings, reinterpretations and covers. I adore She Will Have Her Way, and was thrilled when I worked out Clueless was a rewrite of Emma (to be fair, I saw it in German first so I was just trying to keep up with the conversations). I love – as I did last recently – watching the Half Hour Hamlet and the Express Macbeth in a park performance and then seeing a community theatre production of Pratchett’s Wyrd Sisters which reworks both plays again. I liked Bridget Jones, who has already featured in the Dalek Game: Bridget Jones’s Dalek.

And yes, I have read Pride and Prejudice and Zombies and liked very much the following things:

And I remain disappointed that it never (for me) quite lifted above a gimmick, because there were these odd moments in the book when it hinted at something more than “Pride and Prejudice… with zombies! (and lots of vomiting)” and started to become a story on its own terms. So I’m disappointed for the story that it wasn’t, which I suppose isn’t fair – it was a wildly successful gimmick.

InPRNT is having a 15% off sale on wall-ready art prints this weekend! I am "tanaudel" there too, and have a handful of images available (including the QWC cover art, wolf boys and hind girls).
Music on the wall (and a duck) in Chagford. Few sketches because I was trying to draw with a beer in one hand and sketchbook balanced on my arm.
The road to the woods
Hind girls for the July calendar (and for @angelaslatter 's Sourdough books).
Gates
Good dog