My very odd short story “The Heart of Owl Abbas” is now up on Tor.com!

The story kind-of-sort-of-maybe exists in the same world (or continuum of worlds) as “Kindling” (in Light Touch Paper, Stand Clear and Year’s Best Australian Fantasy and Horror 2012) and “Skull and Hyssop” (Lady Churchill’s Rosebud Wristlet #31 and Prime’s Year’s Best Science Fiction and Fantasy 2015).

Huge thanks to Ellen Datlow, editor for Tor.com, and Angela Slatter, story doctor extraordinaire, for all they contributed, and to publisher and art director Irene Gallo who let me have Audrey Benjaminsen’s beautiful art. I think it’s the first time a story of mine has been illustrated by someone else and I think it is remarkable. I keep staring at all the little details. Thanks also to Noa Wheeler, copyeditor, who gamely catalogued all the careless inventions and copy-edited with an ear for the weird structures, and to Jodi Cleghorn who kickstarted me into writing this particular project when I was focussed on drawing.

Also, a word to the wise: baroque stylings exponentially increase editing difficulty. Thanks here to C.S.E. Cooney who is the sort of person you want on your side to find replacement words that slot into a particular matrix of sense, feeling, alliteration and anachronism. And also to Amber Gwynne, who diagnosed me with semantic exhaustion.

Did I mention I have a new story out in issue 31 of Lady Churchill’s Rosebud Wristlet? I do! It is called “Skull and Hyssop” and is an airship adventure, introducing the would-be-dashing Captain Moon, an enigmatic Weatherfinder, and Eliza Blancrose (who always wears a very smart hat). I say “introducing” because I have started a story about Eliza’s arrival in Poorfortune, and What She Found There.

Here is the full table of contents:

The two pictures in this post are older drawings which date from the early drafts of the story, when I was still trying to work out the look and feel I wanted – from recollection it spun off a glimpse of the figurehead of the Cutty Sark, a girl with whom I used to work, and the idea of “steampunk but blue”. 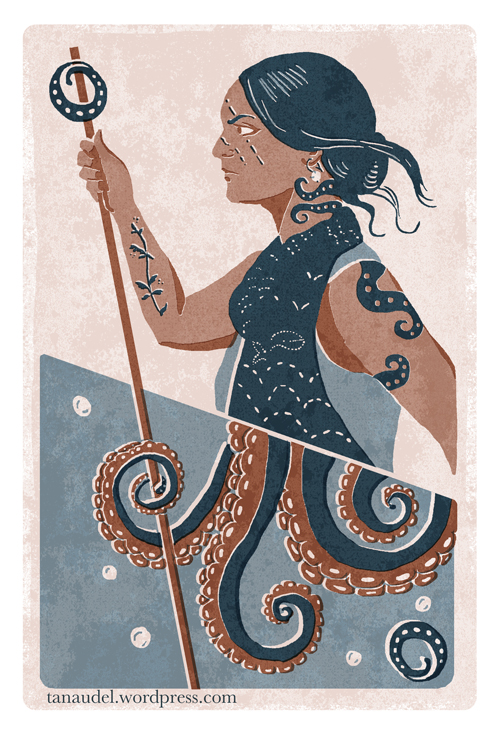 Yet another playing card! I am still working out some techniques with these, and also warming up for some projects which I need to get done ASAP BECAUSE OH MY GOODNESS I FLY TO NEW YORK IN 12 DAYS WHY AM I DOING ILLUSTRATION FRIDAY???

Anyway, here are the pencils for it: 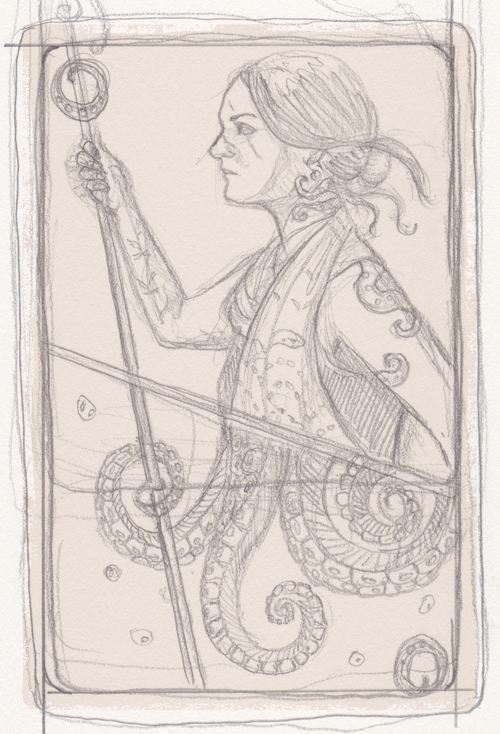 “The English do not have 75 terms for a sidle,” said John Chen. “Rather, they sidle in 75 different ways. There is probably a Ministry for it. See below.” He indicated with a bony forefinger a pedestrian – black coat, scarf, hat. Collar to his cheekbones.

“I am rarely earnest, but always sincere.”

Chen’s articulate, articulated shrug rippled from one shoulder to the other and terminated in an irritated shake of his head. “I have made a study of ambulation.”

“I believe I read your monograph.”

“Class, education, formative climate – a biography written in the million modifications of a walk. I have uncovered spies, rescued those without confidence from conviction as con artists. For amusement, I passed a chimneysweep off as minor royalty. This man is hurpling”

“My dear, the application of the term is simplicity itself –his limbs and shoulders are contorted, indrawn, neck bent so barely a glint of bronzed complexion (or gingerous eyebrow?) shows between felt and fabric. He imitates, inexpertly, the action of the tortoise, the wind slowing his progress to the speed of that noble beast.”

“You confuse poetic and forensic exactitudes. Major classification completed we turn to subtleties. His attitude is, I repeat, inexpert, his contortions overdrawn. Altogether, a caricature. His struggle, however, speaks less of dramatics than of unfamiliarity. The apparent disproportion of head and shoulders– a false perspective given by the collar – supports this.”

Pettifer tilted her head, an artist considering a composition.

“Hands in pockets, inhibiting the free swing of limbs. Not holding aloft the ubiquitous umbrella, suggesting the wisdom of the native, save that our man conceals no umbrella about him.”

“Of course,” murmured Pettifer, as if light dawned.

“Either he possesses none, or lost possession of it in the gale. He is therefore either unfamiliar with the device’s necessity or its principles of use. Then his stride – slowed by the ferocious breeze, yet straining to cover an open distance not found in these streets. The horseman’s easy roll rather than a sailor’s stagger, yet halting as if, though raised to certain footing, now unsettled by forced awareness of the hazards of gratings, leaf-drifts, ice and small dogs.”

“At a hazard, an Australian stockman. Recently arrived, here against preference, nervous, and – as he vanishes from our view – on his way to this door to seek advice.”

“He is come to escort me,” said Pettifer, rising as the doorbell rang a beat too long. “You will like to meet him.”

Her bootheels tapped neatly on the stairs. In the hall, into which the housekeeper had admitted their subject, she lifted off their subject’s hat and ran her hand familiarly over the bald bronze pate.

“We shall have to get you an umbrella, old fellow,” she said, taking the guest’s metal hand from his pocket and examining the finger-joints. “And teach you to hold it. That nearly gave the game away.”

I’ve had a few weeks of coming over all writerly, and some of the latest news is that my short steampunk-ish story “Kindling” (which I wrote about here and here), originally published in Light Touch Paper, Stand Clear from Peggy Bright Books, has been selected to appear in the Year’s Best Australian Fantasy and Horror 2012, to be published by Ticonderoga Publications in June 2013. So I’m celebrating it with this little steampunk fairytale picture.

In quite a cool little twist, I also illustrated the original publication of Faith Mudge’s “Oracle’s Tower”, and although the art won’t be in this book, I will exercise the illustrator’s prerogative to bask in a little reflected glory.

It is part of the following amazing line-up (with beautiful cover art by Yaroslav Gerzhedovich):

Light Touch Paper, Stand Clear (including my short story “Kindling“) is now available in a Kindle edition from Amazon.

Steampunk! An Anthology of Fantastically Rich and Strange Stories (including my comic “Finishing School“) is available as an ebook from a number of places. That should include iTunes, but possibly not in Australia yet.

I have just sent off the art for a new comic, which I hope will become a Real Thing, subject to various approvals. In the meantime, the picture at the top of the page is a personality comparison between my last comic heroine, Gwen, and my new one whose name is not currently used (but is Marilyn). I’ve been trying to loosen up and be a lot sketchier for this comic – “Finishing School” betrays signs of terror and excessive caution – and there are a few panels where I could feel that clicking. I’m not sure you can tell by looking which panels they are, but I can see where I began to let go.

I had to force that – blowing up the original thumbnail sketches, putting clean paper over them on a light box and going straight to inks with a dip pen, instead of doing complete-blue-pencil-and-technical-pen as for “Finishing School”.

I have been variously snowed under, sick and out of town, so in the interests of posting something other than a Dalek, here is a rambling lady I drew earlier in the year. The original pen and ink drawing was a gift to a friend based on the very brief description of one of her characters as a steampunk witch (I added the cloud and birds digitally for a touch of colour.). I understand the illustration does not resemble the character at all, but I am pleased with the Swiss Army Staff. You probably cannot tell, but it incorporates (among other things) a music box.

I drew these on Saturday, as a warm-up exercise before starting on other work, and now it is… Thursday? Who let that happen? Anyway, this is a series of drawings from/for/related to a little airship story of which more may be heard one day. Pen and ink with digital shading. The single shade is due to having the other work to finish, but fits with what I have been trying to do with the story, which is to write a story that ought to be steampunk but feels more blue-and-white than bronze-and-copper. I am not sure whether the story succeeds, but the drawing does. It is very late on Thursday, and that is as deep an analysis as I am capable of.

There was a young lady of Niger
Who smiled as she rode on a tiger.
They returned from the ride
With the lady inside,
And the smile on the face of the tiger.

This was drawn in pen and ink with digital colour for Illustration Friday, and is part of an idea I was toying with for a steampunk/clockpunk circus. But here I discovered a flaw – for who would wind up the tiger?

The limerick is by William Cosmo Monkhouse.

This instalment of the Dalek Game is for Michael Bond’s A Bear called Paddington. A number of illustrators have drawn Paddington Brown over the years, but my Paddington has always been the one of Peggy Fortnum’s original illustrations.

In other news: I am back from my holiday and will put up more non-Dalek pictures and posts soon, but in the meantime, Steampunk! comes out on Tuesday the 11th, and I have my contributor copies! I may have danced a little bit.

Considering some villainous characteristics (not necessarily with approval, but definitely with intent).
The tiniest cow.
Repost from @litjoyshop
The other colour for the October calendar!
The October calendar!
Tiny portrait (from memory) of my little plastic reference skeleton.